Last week, more than forty students from campuses across the United States gathered in Washington for two and a half days of intensive learning, networking, and training. The John Quincy Adams Society’s annual conference is our premier event for developing the next generation of foreign policy leaders. Participants leave better prepared for careers in international affairs – and better prepared to drive conversations about national security on their campuses and beyond.

After an opening night social – featuring foreign policy trivia – things kicked off on Thursday morning with a live taping of the Power Problems podcast. The episode, hosted by Emma Ashford of the Cato Institute with guest Heather Hurlburt of New America, dug into the growing debate on the future of U.S. grand strategy – a theme throughout the conference. Students had a chance to ask questions during the recording.

Very cool to have an insider’s perspective [and the] ability to ask questions.

A student leader on the podcast

Next, leaders learned how to build campus communities strong enough to host events like the one they’d just witnessed. Southern Regional Director John Goodnight shared tips from his years of campus organizing in a fast-paced training session.

After that, several student leaders from top chapters in the 2018-2019 academic year offered lessons learned from their own experiences.

[This] answered many questions that I had about how to lead a chapter and what resources are available to me.

Next, outgoing Northern Regional Director Kerby Davis dug into the many programs JQA Society chapters can run, from learning modules and social activities to speaker events and socials. Students then broke into groups to practice developing plans and overcoming challenges based on real-life experiences from other campus chapters.

Next, we headed up to Capitol Hill to hear from high-level foreign policy players.

A student leader on our visit to Capitol Hill

[It was] really cool to hear how ideas we’ve been talking about are being implemented in Congress.

A student leader on our visit to Capitol Hill

Then, we gathered nearby with professionals with experience in several different career paths within the foreign policy world, including think tanks, policy advocacy, academia, government service, the military, and the media. This event gave our student leaders the chance to connect with those who’d been where they want to end up, to get insight about early career moves and graduate schooling, and to learn more about paths that they hadn’t considered before.

Enjoyable, educational, and gave me better insight as to what I want to do with my life.

A student leader on our career night

The next morning, students experienced an intensive seminar on grand strategy, intervention, and the future of great power competition (especially with China). They’d completed a rigorous set of prerequisite readings to prepare for the discussion. Facilitators Emma Ashford (of Cato) and Stephen Wertheim (of Columbia University and the new Cato Institute) led a deep conversation on these three issues that these student leaders will need to navigate as they move through their careers.

After lunch the Society’s executive director, John Allen Gay, led a discussion of the keys to effective campus leadership. Gay then talked about how to best market experience in JQA Society chapter leader to future employers.

Finally, the Society honored top-performing chapters in an awards ceremony, recognizing the best single event, the best programming, the best new chapter, and the chapter of the year.

Everyone is very open to sharing tips and tricks – not competitive, but a unified group…amazing!

A student leader on the atmosphere at the conference 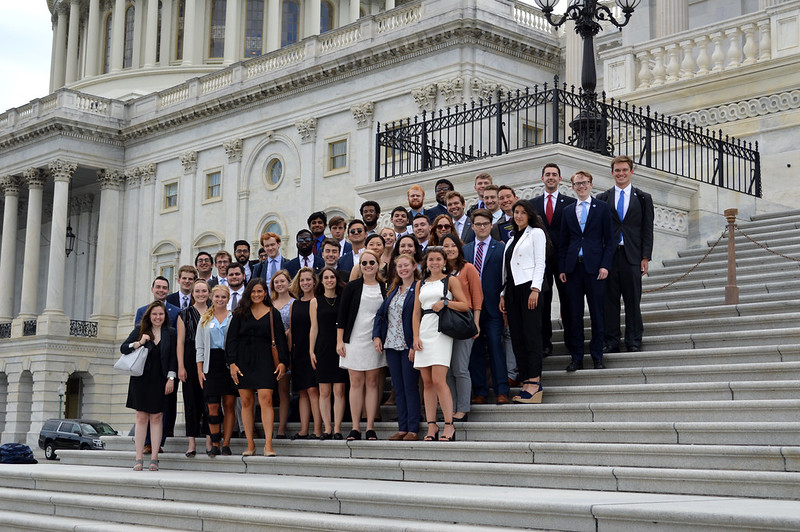 This was the Society’s second annual conference, attracting even more students and more universities than the first (indeed, there were more universities represented at this conference than there had been students at the first). The 2018-2019 academic year had been the strongest yet for the Society’s campus programs, and many attendees of the first conference had gone on to build solid chapters and land coveted internships. If past is prologue, 2019-2020 will see the student leaders of the John Quincy Adams Society charge ahead to even stronger results.